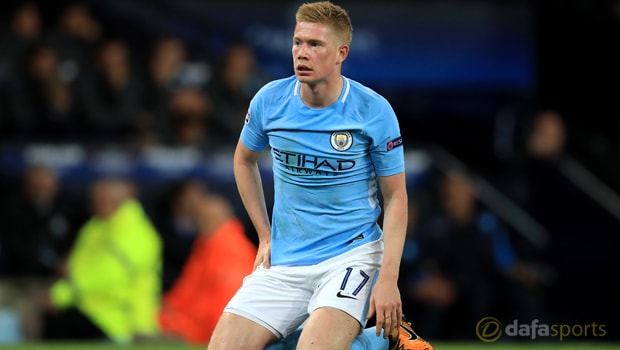 Manchester City midfielder Kevin De Bruyne believes the Premier League title is already shaping up to be a two-horse race between his side and rivals Manchester United.

Both Manchester clubs have made a fantastic start to their Premier League campaigns with undefeated City at the summit on 22 points, just two points ahead of also unbeaten United.

The Citizens have been receiving rave reviews for their recent performances and the attacking prowess on show, which includes the likes of Sergio Aguero, Leroy Sane, Gabriel Jesus and David Silva, has been striking fear into opposition.

United, although arguably not producing the same free-flowing football as their rivals, have been finding a way to get the job done and Belgium international Romelu Lukaku has been in fine form, scoring seven goals from eight league appearances.

Defending champions Chelsea have been inconsistent and they sit fifth in the table, nine points off the top, whilst third-place Tottenham Hotspur and Watford in fourth and on 17 points and 15 points respectively.

Already, it appears to be boiling down to a Manchester battle for the title and De Bruyne, although agreeing with this, has warned things can quickly change in this league.

“For the moment I think so, but everybody’s still there,” the Belgium international told ESPN FC.

“It’s so early, if you lose two or three games you go back to a [lower] position. We have to maintain this hopefully.”

City return to action on Saturday with a home clash against Burnley and the hosts are 1.10 favourites to win, a draw is priced at 10.00 whilst the Clarets are massive outsiders at 26.00.

United are at away at Huddersfield on the same day and the Terriers are 10.00 outsiders, a draw is priced at 4.75 whilst the Red Devils are shortest odds at 1.36.