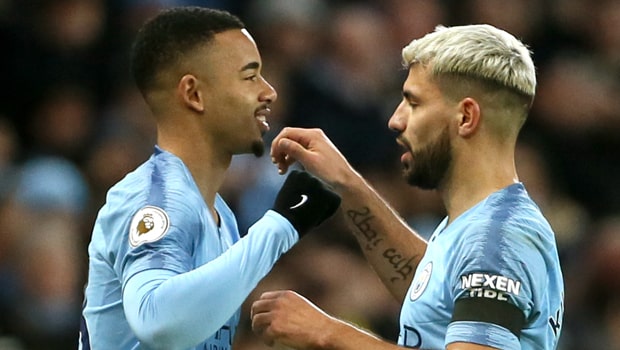 Gabriel Jesus says he is not planning to leave Manchester City this summer and neither is team-mate Sergio Aguero.

There had been some suggestions that Brazil international Jesus was considering quitting the Etihad Stadium after seemingly growing tired of playing second-fiddle to Aguero during the 2018-19 campaign.

There has also been talk of Aguero leaving City over the coming months, with the 31-year-old having reiterated last month that he still plans to end his career at boyhood club Independiente.

However, Jesus, who is currently representing Brazil at the 2019 Copa America, has now moved to reassure supporters that neither he or Aguero will be going anywhere this summer “I think it’s out of the question that Aguero leaves and me too.

He is a legend at the club – he’s the top scorer [of all time],” Jesus told Sportsmail.

Jesus did confirm that he is hoping to feature more regularly in the big matches for City next season, although he feels it is no disgrace having to play second-fiddle to a forward of Aguero’s ability.

He added: “Obviously as a player I always want to play, but I’m happy to help and I respect Sergio.”

City will kick-off the new Premier League season with a trip to the London Stadium to take on West Ham on August 10 and they are priced at 1.60 to go on and be crowned champions for the third successive campaign.