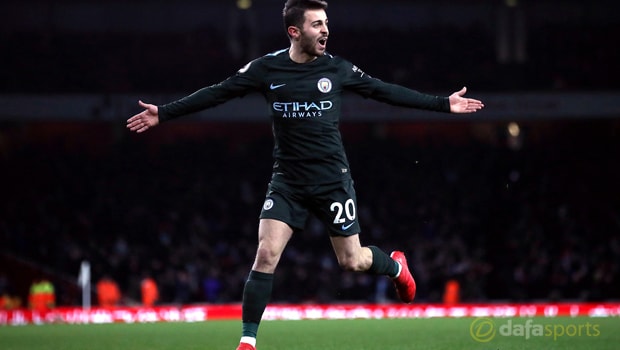 Bernardo Silva says Manchester City will do everything to wrap up the Premier League title as quickly as possible following Thursday’s 3-0 win at Arsenal.

After beating the Gunners by the same scoreline to win Sunday’s EFL Cup final, the Citizens could again manage to cruise through their trip to the Emirates, with their opponents failing to cause them any real harm.

The result restores City’s 16-point lead in the standings and means that wins in their next three games will allow Pep Guardiola’s men to seal the title against local rivals United on April 7.

Bernardo scored the opening goal at the Emirates and has become an increasingly important part of the side in Raheem Sterling’s injury absence.

With the Champions League still to play for, City, who are the 4.00 favourites for the trophy, will be keen to eliminate as many distractions as possible.

Securing the Premier League title will give them extra time to ponder their European exploits and the 23-year-old says they are now focused on getting the job done at the earliest available opportunity.

“We want to try to win every game. Tonight we’re happy with the three points.

“We play at home against Chelsea and we want to do the same thing and win three points to try to win the Premier League as soon as we can.”