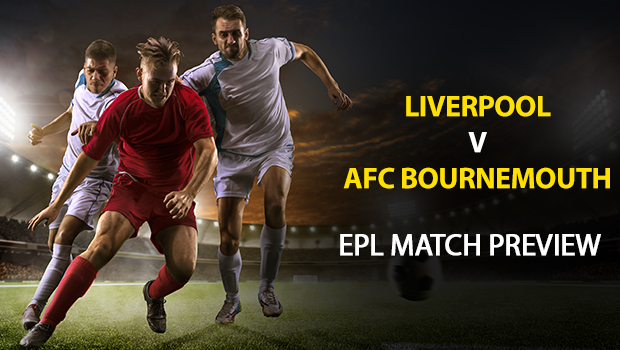 Liverpool — currently sitting in the No. 2 spot five points behind Manchester City — clash with AFC Bournemouth this weekend at Dean Court. Bournemouth head into the matchup ranked sixth in the Premier League.

Betting on the Draw: Odds — at 4.23 — indicate there’s a 23.6 percent chance the match ends in a draw. There’s a draw in 20 percent of AccuScore sims, suggesting no added side value on the draw.

Betting on the Total: On average, Bournemouth scores 1.84 goals per match at home; Liverpool scores 1.94 goals on the road. Those figures would suggest a pick on the over of 3; the average combined score in AccuScore sims is 2.93 goals.

Last Time Out: Both sides are coming off wins from last week. Bournemouth got a 2-1 win over Huddersfield, while Liverpool defeated Everton 1-0.

Head to Head: These two sides last faced off in Premier League action back in April of 2018 when Liverpool won 3-0. They’ve faced off three times in league competition since 2017; Liverpool has two shut-out wins, and one 2-2 draw.

Projected Leaders
Mohamed Salah has a 53 percent chance to score for Liverpool. He averages 3.74 shots overall per sim, 1.55 shots on goal per and 0.74 goals per sim.

For Bournemouth, we’ll have our eyes on Callum WIlson who has a 19.5 percent chance to score. He averages 1.52 shots overall per sim, 0.64 shots on goal per and 0.22 goals per sim.

Odds — at 1.86 — indicate there’s about a 54 percent chance Liverpool win this match by at least one goal. They win over 68 percent of AccuScore sims, with the average margin of victory being +1.35 goals. Liverpool winning is a four-star (out of four) AccuScore hot trend pick.