Points the only target for Liverpool 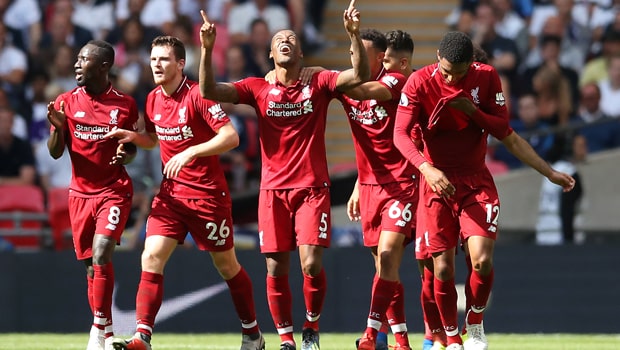 Midfielder Georginio Wijnaldum says Liverpool have no interest in making “statements” and are only concerned with picking up points after seeing off Tottenham.

The Reds maintained their 100% start to the season with a 2-1 win at Spurs on Saturday but slipped to second spot in the standings as Chelsea, who thrashed Cardiff 4-1, now boast a superior goal difference.

The clash against Tottenham was the first time this season Liverpool have come up against a likely top four or title rival, but Wijnaldum played down the significance of the victory.

“I don’t really want to speak about statements because every game is different,” Wijnaldum, who opened the scoring on Saturday, told the club website.

“Now is Tottenham, other teams will come. A game is a game, it’s not really a statement. You can win today and lose another game.

“We just must make sure that we will not lose these games easily and that we have to do a lot of things to win these games. We have to be concentrated, give everything, and play good football.
Then we can win these games. But we need to focus on those things and not giving statements.”

The Anfield outfit turn their attentions to the Champions League on Tuesday when they entertain Paris Saint-Germain. Liverpool are 2.25 to win, a draw is 3.75 and PSG are 3.00 to come out on top.