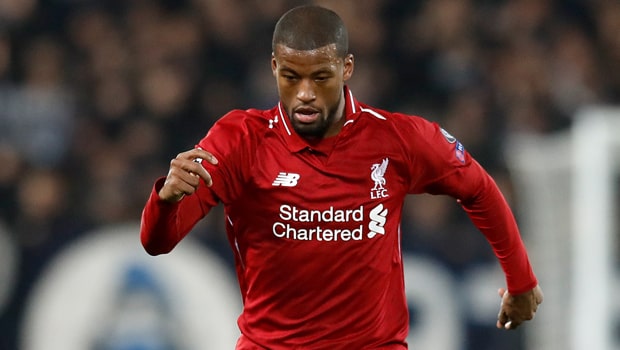 Liverpool midfielder Georginio Wijnaldum insists his side will not underestimate Manchester United ahead of Sunday’s clash between the two Premier League giants.

The Merseyside outfit are the last remaining team with an unbeaten record in the Premier League and sit at the top of the pile on 42 points from 16 games so far.

Wijnaldum is taking nothing for granted, however, and says any talk of Liverpool enjoying an unbeaten season is premature.

“I don’t really think we are invincible and if we think that we have a manager [Jurgen Klopp] that would put both feet on the ground,” he said.

In contrast, United have struggled this term and are 16 points behind Liverpool in sixth spot, but Wijnaldum expects a stern challenge from the visitors at Anfield on Sunday, regardless of their current form.

“Things can happen, everyone can have a bad season,” he added.

“I think the year before I came Liverpool finished eighth, so those things can happen. That does not mean they are not a good team with good players.

“Last season with the same players they finished second. One season goes well, one season a little bit more difficult.

“It doesn’t mean they have a bad team: they have good players, a good manager [Jose Mourinho], and they know how to manage games and win games – or not to lose games. It is going to be difficult.”

Liverpool are 3.50 to win the Premier League outright and United are 8.50 to claim a top-four finish.