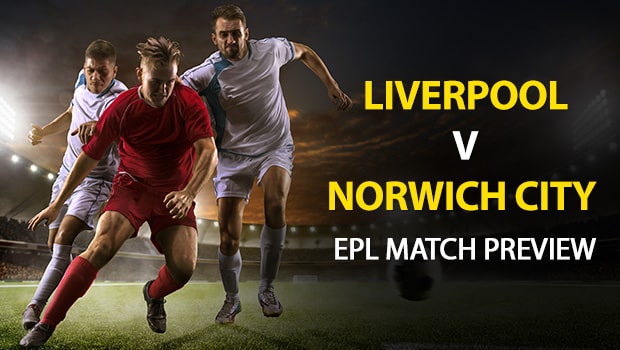 Premier League action is back – finally. Liverpool and Norwich City kick things off at Anfield Friday as we head into the first weekend of action.

Draw: There’s a about an 11 percent chance the match ends in a draw. There’s a draw in 15 percent of AccuScore sims, suggesting no added side value on the draw.

Last 6: Liverpool have 2 draws, 1 win and 3 losses in their last six overall. The just finished in a 1-1 home draw vs Manchester City in the FA Community Shield on Aug. 4. Norwich haven’t had as much recent action as Liverpool, with 2 wins and four draws going back a few months. They last played in early May when they won on the road 2-1 vs Aston Villa in the Sky Bet Championship.

Coming Home, of Sorts: Norwich City’s Teemu Pukki made it clear this week that he’s excited for the season opener against Liverpool at Anfield. “It’s the best game to start with, and the one I was looking out for,” he said. “A lot of my family follow Liverpool, including my dad Tero and my uncle. In Finland I would say Liverpool is the biggest team, it started in the 1980s with the games on the television.” Liverpool will be a test for both Pukki and the Canaries, but all signs point to him being ready for it. In the past 12 months, Pukki has netted 36 goals in all competitions — and enters this matchup rested and ready to go.

Teemu Pukki has close to a 30 percent chance to score for Norwich City this Friday. Pukki averages 2.18 shots overall per sim, 0.84 shots on goal per and 0.35 goals per sim.

There’s a 56 percent chance Norwich City lose by fewer than three goals. The Canaries — on average — lose by a margin of 1.93 goals in AccuScore sims. While we definitely don’t expect Norwich to be competitive, we do project more side value on the draw than do offshore books. Being the first match of the season, both sides should be slightly rusty.