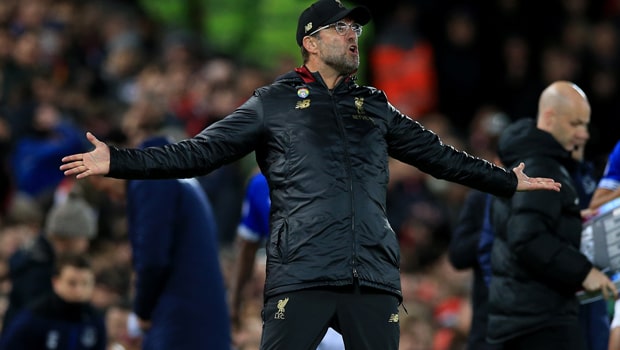 Liverpool boss Jurgen Klopp has apologised for his wild celebrations after Divock Origi scored a 96th-minute winner during Sunday’s Merseyside derby against Everton at Anfield.

The match looked destined to finish goalless after both teams had spurned clear goal-scoring opportunities earlier in the contest, but a mistake from Toffees goalkeeper Jordan Pickford deep into stoppage time enabled substitute Origi to win the game for Liverpool.

Origi’s goal led to scenes of celebration on the Reds bench, with Klopp running onto the pitch in excitement before embracing with goalkeeper Alisson.

After the match the German admitted he may have gone a little over the top with his celebrations and he was quick to apologise to his Everton counterpart Marco Silva.

“I have to apologise because I didn’t want to be disrespectful but I couldn’t stop myself,” Klopp told Sky Sports.

“It just happened!” Klopp was also keen to pay tribute to match-winner Origi, who was one of the players guilty of spurning a golden opportunity earlier in the piece.

The Belgium international has struggled for game-time with Liverpool since breaking his ankle in the Merseyside derby 20 months ago and he spent time on loan at Wolfsburg last season as a result.

Klopp admits is has been a long-road back for Origi and he was delighted to see the 23-year-old score such an important goal that enabled Liverpool, who are priced at 1.30 to finish best of the rest behind Manchester City, to close the gap at the top of the Premier League standings to two points.

“It is such a nice story that Divock Origi can score a goal,” Klopp added.

“It is a horrible injury he got in another derby and it was a big break in his career.

“Now he is back fully fit and can come in and score this goal. It is really cool.”