Jurgen Klopp: We were stubborn 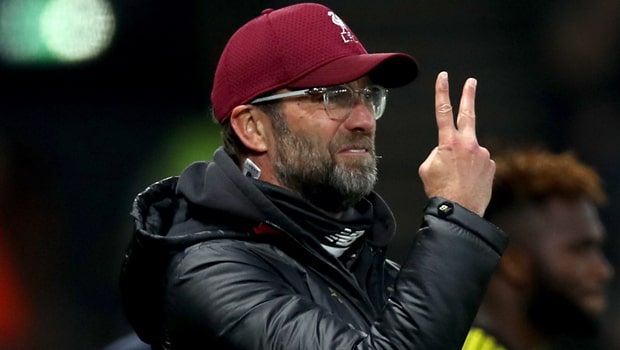 Jurgen Klopp praised Liverpool for their stubbornness after they secured a 3-0 win away at Watford and their best-ever start to a Premier League season.

Liverpool are now unbeaten in 13 league games in 2018-19 and have more points – 33 – than they have ever had at this point in a Premier League season before.

They had to wait for their rewards at Vicarage Road however, with Mohamed Salah opening the scoring midway through the second half.

Trent Alexander-Arnold and Roberto Firmino made sure late on as Watford were drawn out of their counter-attacking tactics and Klopp was impressed that his side found a way to win – comfortably – having again not been at their fluent best.

“We stayed stubborn. They defended and counter-attacked and we had a few really good moments we didn’t score, which is not a big problem if we stay on track,” said the German.

“How we closed down the game was just brilliant, especially the third goal. The first goal was brilliant football and the free-kick from Trent [Alexander-Arnold] was a dream. It was a good game against a good side.”

The win kept Liverpool on the coattails of leaders Man City, who thrashed West Ham 4-0 at the London Stadium, while the front two have extended their advantage on the rest after Spurs swept Chelsea aside 3-1 at Wembley.

The only downside for Liverpool was skipper Jordan Henderson getting sent off for a second booking late on at Watford. “It happens,” Klopp said.

“Jordan Henderson was not happy about his mistake but what a guy he is. He has a heart like this, so sometimes it leads you on the wrong path. We wanted to change him but we were a little bit too late.”

Liverpool are 4.50 to win the title this season, with Man City now 1.22 to retain their crown.