Jurgen Klopp: We created a wonderful base, now let’s use it 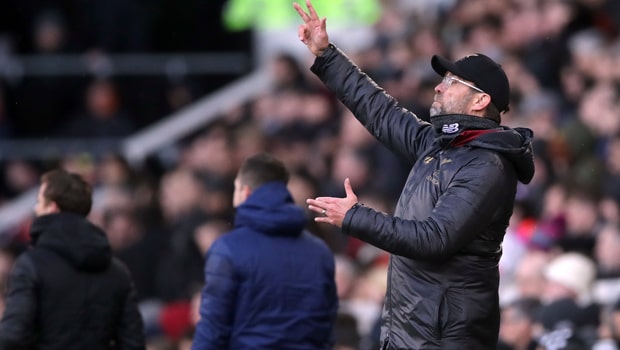 Jurgen Klopp says Liverpool have given themselves a ‘wonderful base’ for the closing weeks of the season and he’s urging his players to seize their chance.

Liverpool are top of the Premier League pile, two points clear of champions Manchester City having played a game more, while they have a Champions League quarter-final against Porto to look forward to.

With the final international break now at an end, Klopp is relishing the chance to fully engage his squad in an uninterrupted finish to the season.

“It is [exciting], absolutely,” Klopp told Liverpool’s website. “That’s what we were always talking about – a season is like that, you constantly prepare a basis for the final weeks.

Liverpool host Tottenham at Anfield on Sunday. Mauricio Pochettino’s side are desperately trying to cling to their place in the top four after a stuttering run domestically.

The Reds remaining away fixtures take them to Southampton, Cardiff and Newcastle, with home games to come against Chelsea, Huddersfield and Wolves.

Klopp points to the fact that all bar one of those opponents are fighting for their own needs.

“I think only Wolves in the last match, they are not fighting for Champions League and not fighting for staying in the league,” says Klopp, “but we all see what shape they are in – and they can go to the FA Cup final, so that’s exciting for them. But these are our opponents,” he added.

“Champions League, we don’t have to talk about that because they are all finals, each game is a final. Hopefully we can stay in that competition for a while. “We created a wonderful base, now let’s use it.”

Liverpool are 1.60 to beat Tottenham at Anfield on Sunday, with Klopp’s team priced at 3.00 to win the Premier League title this season.