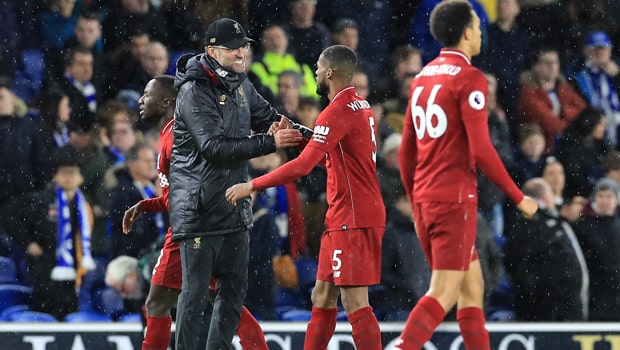 Liverpool manager Jurgen Klopp says he is taking the positives out of Wednesday’s 1-1 home draw against Leicester City, despite failing to fully capitalise on Manchester City’s slip-up 24 hours earlier.

With the Citizens suffering a shock 2-1 defeat at Newcastle United on Tuesday evening, Liverpool had the opportunity to move seven points clear at the top of the Premier League when Leicester made the trip to Anfield.

The Reds got off to the perfect start when Sadio Mane opened the scoring inside three minutes and it could have been better for the hosts, who saw Roberto Firmino’s low strike superbly saved by Kasper Schmeichel just moments later.

However, Leicester grew into the game and they got a deserved equaliser in first-half stoppage-time when Harry Maguire slotted home a neat half-volley when left unmarked in the penalty area.

Klopp’s men were denied a penalty after the break when Naby Keita was brought down by Ricardo Pereira, while the Foxes were almost gifted a goal when Firmino’s attempted clearance was saved brilliantly by Alisson’s legs on the goal line.

A share of the spoils was arguably fair on both teams and although failing to move seven points clear at the summit, Klopp was in positive mood after his side went ahead of City. “We have a point more than before,” he added.

“That’s not exactly what we wanted to have but still everything is fine. I know at the moment I don’t think anybody further was injured, which helps us obviously a lot and now.

“We have a few days to prepare West Ham and then we go again, and then Bournemouth and we go again and all that stuff. That’s what we’re doing, not counting points and hoping for gaps between us and other teams. We have to win our football games.”

Liverpool are back in action on Monday night when they travel to West Ham and the Hammers are the 8.50 outsiders to clinch all three points, a draw is priced at 5.25 and the Reds are 1.36 favourites.