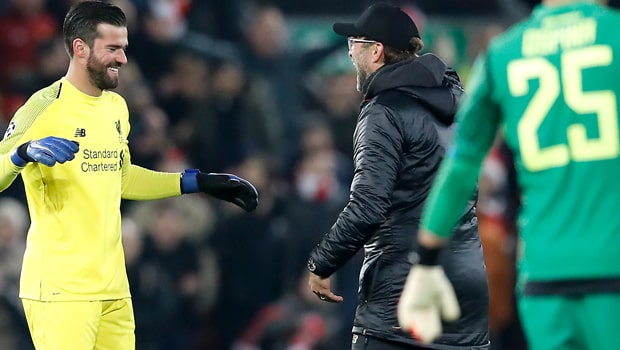 Liverpool coach Jurgen Klopp has praised goalkeeper Alisson after he helped his side reach the last 16 of the Champions League at the expense of Napoli.

The Reds went into the clash at Anfield knowing a 1-0 win would be enough, but they had to win by two clear goals if Napoli netted on Merseyside.

Mohamed Salah opened the scoring for the Reds in the first half and Liverpool managed to keep another clean sheet on home soil.

That was largely down to a save from Alisson in stoppage time. The Brazil international rushed out of his goal to deny Poland international Arkadiusz Milik from scoring from inside the six-yard box.

With so much on the line, Klopp has praised his keeper, who cost £66.8million, and he admits he would have paid double for him now he knows how good he can be.

“The goalie made the save of the season,” Klopp said.

“I have no clue how he made that save. Thank God we have him. If I’d known how good he was, I’d have paid double. I think nobody expected a save in that situation.

It’s a goal, no? “He had a lot of things to do tonight but how cool and calm he was says a lot. But still he needs the other boys around, so he doesn’t have to make 100 saves like that.

“It was unbelievable, what the boys they did tonight, it was so special. They created such an incredible atmosphere I am still full of adrenaline about it, just unbelievable.”

Liverpool finished second in Group C behind Paris Saint-Germain and they are now 11.00 to go on and win the tournament, while PSG are 8.50 to lift the trophy.