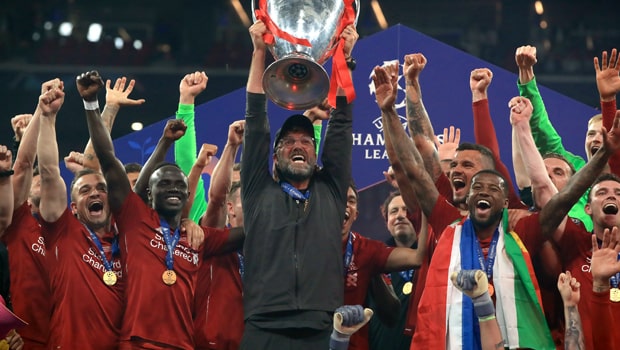 Liverpool manager Jurgen Klopp says Saturday’s Champions League success was the best night of his career as the Reds won their sixth European Cup at the expense of Tottenham Hotspur.

The Anfield outfit, who are 3.60 to win the Premier League next season, triumphed in Madrid after an underwhelming final between the two Premier League giants.

Klopp’s men made a blistering start to the game as they opened the scoring inside the first two minutes. Moussa Sissoko was adjudged to have handled a Sadio Mane cross, with Mohamed Salah scoring from the penalty spot.

Goalkeeper Alisson was on hand to deny Spurs on several occasions before Divock Origi struck in the final 10 minutes to ensure Klopp won his first major trophy since he arrived on Merseyside in 2015.

When asked about the final, Klopp told BBC Sport: “Did you ever see a team like this, fighting with no fuel in the tank? I am so happy for the boys, all these people and my family. They suffer for me, they deserve it more than anybody.

“It was an intense season with the most beautiful finish I ever could have imagined. “I feel mostly relief, relief for my family.

The last six times we flew on holiday with only a silver medal it didn’t feel too cool. “Tonight was a big challenge for both teams to deal with the three weeks with no game.

The final is about the result and tonight the boys showed the resilience we needed. I don’t want to explain why we won it, I only want to enjoy that we won it. “Tonight is really emotional, but I’m much calmer than I thought.

“It wasn’t important for me to touch the cup. I loved seeing the boys having it and seeing some faces in the crowd. Going to Liverpool tomorrow with something to celebrate is big and I’m really looking forward to that.”