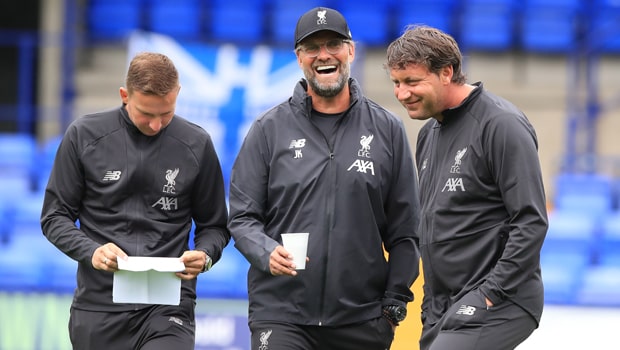 Jurgen Klopp has said the youngsters in Liverpool’s squad will have a big part to play during pre-season.

The Reds boss was able to give lots of the squad some time on the pitch in their first game of pre-season, beating Tranmere Rovers 6-0 at Prenton Park. Rhian Brewster, one of a number of promising youngsters at Anfield, scored two goals in the first half to add to another from Nathaniel Clyne.

Klopp changed his entire team for the second half and three more goals were added, from Curtis Jones, Divock Origi and Bobby Duncan. Liverpool play at Bradford on Sunday and then travel to the USA for a pre-season tour and Klopp insists he will keep playing the youngsters to give them invaluable experience.

He told LFCTV after the game: “We need them. We have to do that. The boys are big talents. Sometimes with young age groups you show up, then have a bit of a dip, but at the moment they are fresh.”

On the win over Tranmere he was pleased with their first game since winning the Champions League at the end of last season, adding: “All round it was a very good performance, both halves, against a good and especially strong side physically.

“We looked at it before the game and in boxing you’d say it wasn’t the same weight class. The boys let the ball do the work pretty much.”

Liverpool take on Dortmund, Sevilla and Sporting Lisbon in the USA with further pre-season games to come against Napoli and Lyon before taking on Manchester City in the Community Shield at Wembley. The Reds get the new Premier League season underway on Friday 9 August when newly-promoted Norwich City are the visitors to Anfield.