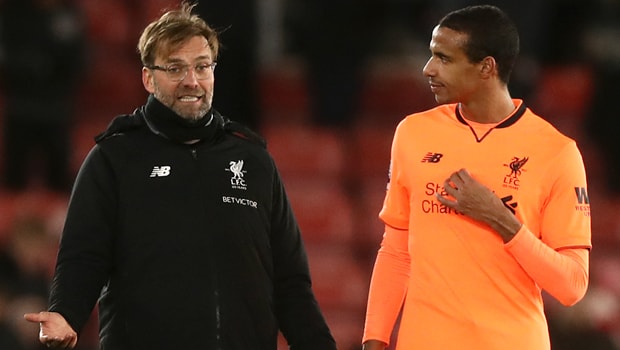 Jurgen Klopp is hopeful the new thigh injury which forced Joel Matip out of Liverpool’s 3-1 pre-season friendly defeat against Borussia Dortmund is “just a little tear”.

The Reds boss had to cope without the 26-year-old Cameroon international defender for the remainder of last season when he suffered a thigh injury against Crystal Palace at the end of March.

Matip required surgery on the injury and was working his way back towards full fitness this summer with one eye on the new Premier League campaign, which gets under way on August 12 against West Ham at Anfield.

However, his involvement against the Hammers is now in doubt after another thigh muscle problem just 22 minutes into the Dortmund game, which Klopp insisted is not a repeat of the one suffered last season and he remains hopeful that Matip’s lay-off will not be a long one.

Speaking after the International Champions Cup defeat in Charlotte, North Carolina, the German said: “It’s not the same injury.

It’s another muscle – it looks like, hopefully, only a little tear. “We will see, but we cannot say any more about it now.

It is of course the most negative thing about the day. It’s not cool. Things like this can happen, but you don’t want them to.

“Maybe on Monday or Tuesday we will know more, but in this moment we only know that it was too painful for him to carry on.”

The Reds now face Manchester City in the pre-season tournament at New York’s Metlife Stadium on Wednesday and are 21/20 to win, while City are 21/10 and the draw is 11/4.