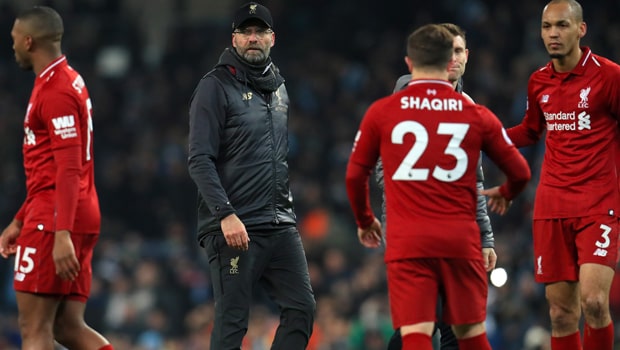 Jurgen Klopp believes winning the FA Cup this season would not be enough to silence Liverpool’s critics.

The Reds have made steady progress since Klopp succeeded Brendan Rodgers in the Anfield dugout back in 2015, but the German has yet to win a trophy with the club, seeing his side lose in the finals of the Champions League, Europa League and EFL Cup over recent campaigns.

Liverpool face a tough looking FA Cup third-round clash with Wolves at Molineux on Monday night and they will head into that game on the back of their first Premier League defeat of the season, suffered against Manchester City last time out.

Despite that loss, the Merseysiders remain four points clear at the top of the standings as they go in search of a first league title in 29 years.

Klopp admits Premier League glory is the main priority for his side as he does not feel winning the FA Cup will be enough to silence their critics.

“It is always when people talk to me about silverware it always looks like we have to get each little thing,” Klopp told reporters.

“If we won the FA Cup then people would say that we didn’t win the Premier League for so many years. We cannot change what other people think.”

Liverpool lost to a then Championship Wolves side in the FA Cup two years ago but they are priced as 1.95 favourites to secure a victory on Monday, while Nuno Espirito’s side are available at 3.80 and the draw is on offer at 3.50.

The Reds will certainly be confident of securing a victory, as they claimed a 2-0 win at Molineux when the two teams met in the Premier League before Christmas – Mohamed Salah and Virgil van Dijk scoring the goals that day.