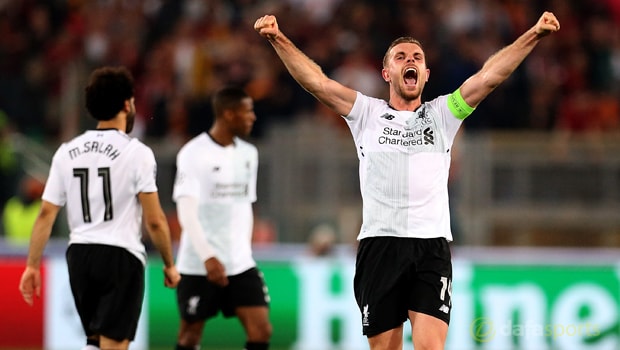 Captain Jordan Henderson has praised the efforts of his Liverpool side after they managed to squeeze past Roma and advance into the Champions League final for the first time since 2007.

Liverpool, leading 5-2 from the first leg, made the trip to the Stadio Olimpico with the European final in touching distance, but they were made to work hard in another thrilling tie.

Senegal international Sadio Mane and Dutch midfielder Georginio Wijnaldum scored either side of a James Milner own-goal to put the visitors 2-1 ahead at the break, extending their advantage on aggregate to 7-3.

However, a double from Radja Nainggolan along with a strike from Edin Dzeko left the hosts needing just one goal to force extra-time but, despite the valiant effort, they fell short, winning 4-2 on the night but losing 7-6 on aggregate.

The Reds will now go on to face defending champions Real Madrid, who defeated Bayern Munich in the other semi-final, in the final at the NSC Olimpiyskiy Stadium in Kiev on May 26.

Henderson, who has made 11 Champions League appearances this season, insists the club have every chance of lifting the trophy.

“We never do it the easy way but it was an amazing effort,” he told BT Sport.

“Overall we handled the situation well apart from the last 10 minutes. We need to stop that but I’m delighted we’re in the final.

“We have another important game on the weekend against Chelsea and then we have Real Madrid in the final. We will go there with confidence.”

Liverpool are the slight outsiders at 2.10 to win the Champions League outright whilst Madrid are marginal 1.73 favourites to win the trophy for the third year in a row.