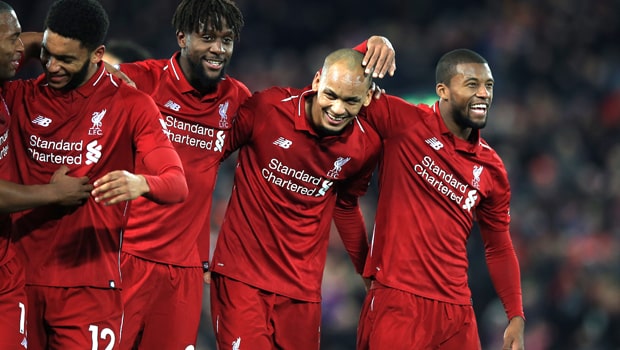 Liverpool midfielder Fabinho has claimed he has no plans to leave the club and wants to fight for his spot in the starting XI.

The Brazil international has endured a frustrating few months on Merseyside, with the former Monaco man making just six appearances since his summer switch from Ligue 1.

Manager Jurgen Klopp claimed he needed “time to adapt” and that led to speculation he would return to France with Paris Saint-Germain.

Jordan Henderson, James Milner, Naby Keita and Georginio Wijnaldum are all fighting it out with Fabinho, but the 25-year-old insists he will not quit as he tries to make his mark in England.

“I was told there was something in the press, but I never said I would like to leave Liverpool,” Fabinho told UOL.

“I knew I would need to have patience to wait for my moment. I am happy at Liverpool. There is no reason for me to leave.

“[Jurgen Klopp] did not give me a lot of explanations, but I concentrated on my work in training and stayed focused on my work, without letting my head drop.

“I tried to work because I knew opportunities would come. Now I just want to increase my number of games.

“In the last few matches I have played more and I believe that [I am] playing a good role. Since football is very intense here, I have to be very well prepared when the opportunity arises.”

Fabinho will be hoping to play his part in the clash at Burnley on Wednesday night, with the Reds short-price favourites. Burnley are 12.00 outsiders, while Liverpool are 7.00 to win 3-0 at Turf Moor.