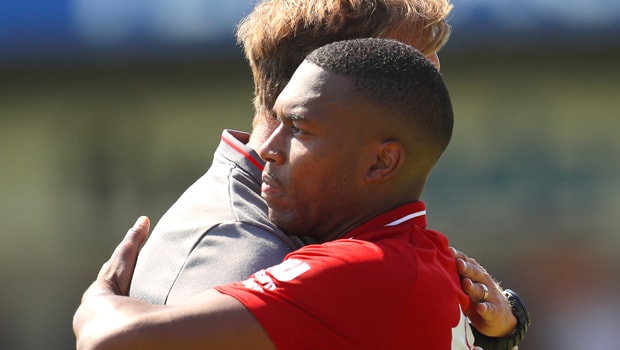 Daniel Sturridge says he has no intention of leaving Liverpool this summer and wants to be a regular first-team fixture under manager Jurgen Klopp.

England international Sturridge arrived at Anfield in 2013 from Chelsea and he impressed during his first two seasons with the Reds, scoring 31 goals from 43 Premier League appearances.

However, the 28-year-old’s progress has been hampered by injuries over the past couple of years and he has fallen down the pecking order at Liverpool, with Mohamed Salah, Sadio Mane and Roberto Firmino forming a formidable attacking trio.

Sturridge was sent on loan to West Brom for the second half of last season but after scoring no goals from six matches, and suffering another injury, the temporary stint was not a success.

Numerous clubs across Europe, including Newcastle, Inter, Sevilla and Fenerbahce, are said to be interested in the striker although there has yet to be another firm offer made.

Klopp has involved Sturridge in pre-season and the latter scored two goals in the 7-0 win over Chester, strengthening his chances of remaining at last season’s Champions League runners-up.

The Birmingham-born star has been speaking about his future and he insists there is no desire to leave Liverpool during this transfer window.

“I see myself staying at Liverpool, hopefully being part of the team week in, week out,” Sturridge was quoted as saying by The Daily Mirror.

“Pre-season is going well, so for me it’s keeping my head down and building on that. I’m excited about the season ahead at it feels great to be back.

“We have the tour to come where we face some great teams like Manchester United, Manchester City and Borussia Dortmund. I’m feeling great and can’t wait to get the season underway.”

Liverpool are 6.00 favourites to win the Premier League while they are priced at 13.00 to win Europe’s elite tournament.