Alex Oxlade-Chamberlain on road to recovery 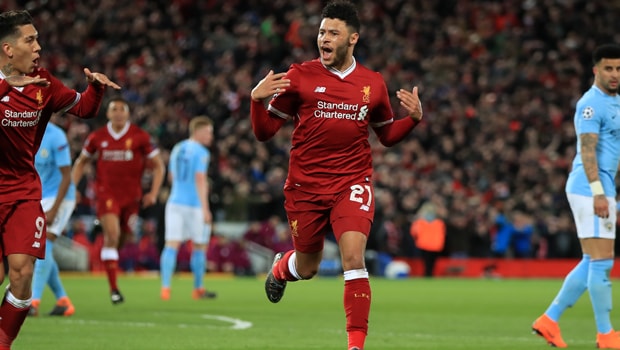 Alex Oxlade-Chamberlain has said his recovery from a knee injury is “moving in the right direction” but refused to set a date on his return for Liverpool.

The 24-year-old suffered a season-ending injury in Liverpool’s Champions League semi-final victory against Roma back in April.

The former Arsenal flyer underwent surgery, which meant he also suffered the heartache of missing out on a place in Gareth Southgate’s England squad for the World Cup 2018 in Russia.

Oxlade-Chamberlain says he has been working hard during the off-season to get over the injury although he accepts it will take time. “It’s alright.

I saw the surgeon just now, he’s happy with everything, so we’re moving in the right direction,” Oxlade-Chamberlain said on the latest episode of the FA’s YouTube programme ‘Lions’ Den’.

“It’s just obviously going to be a long process and a boring one, but that’s life. I’m all good.

“I’ve got to stay positive, it’s not going to get me anywhere if I’m not positive around the lads and just in general.

It’s life, I’m still living so I’m happy.” The former Southampton star, who has scored six goals in 32 appearances for his country, says watching England from afar has been tough, but he is keeping his fingers crossed the Three Lions can go all the way in Russia.

“I’ve been watching the World Cup, following it and supporting the boys every inch of the way,” he said.

“I must admit the first game against Tunisia was tough to watch – it’s a moment when you realise what a great opportunity you’re missing, but these things happen in life and I’m keeping positive.”

Liverpool open the new Premier League season with the visit to Anfield of West Ham and are quoted 1.30 in the 90 minutes betting.