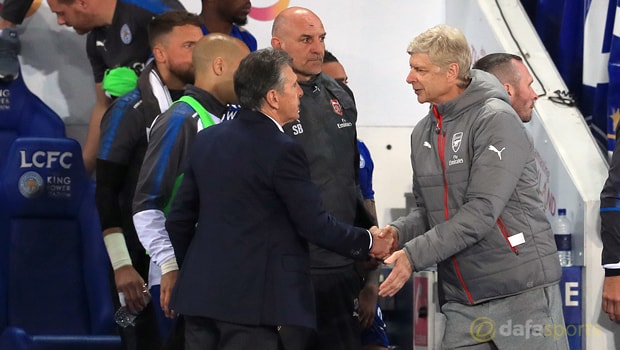 Leicester boss Claude Puel hailed his side’s 3-1 success over Arsenal on Wednesday as an “important” win.

Kelechi Iheanacho, Jamie Vardy and Riyad Mahrez were all on target for the Foxes, with Pierre-Emerick Aubameyang grabbing Arsenal’s consolation goal.

Neither side had anything in particular to fight for as Leicester can no longer qualify for Europe and Arsenal are guaranteed a Europa League spot, but Puel felt it was vital his side picked up three points in their final home match of the season.

“I think it was a great performance,” reflected Puel at full-time.

“It was a fantastic game, with good intensity and a lot of chances. Congratulations to my players because they had a good mentality and showed aggressiveness, passion and desire in their game. They gave their best.

“I think it was important to finish at home with a strong game.

I thought it would be difficult to win this game but the most important thing was to finish at home with a good performance, with quality, and to give a reward to our fans because they have been fantastic since the beginning of the season with all their support for the team.

“It was important to reward them because the last game was poor at home [a 2-0 loss to West Ham].”

He added: “I say the most important thing is to put this spirit, aggressiveness and pressing and conviction.

It was their game. They wanted to finish with a good feeling with the fans and it was a good response. It was important to finish with this quality game.”

Leicester conclude the season with a trip to Spurs on Sunday and they are 10.00 to come out on top, with Iheanacho 4.00 to score at anytime.