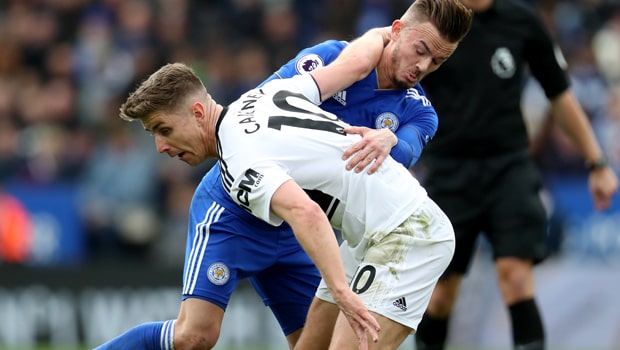 Leicester City midfielder James Maddison insists there is a feelgood factor around the club since
Brendan Rodgers arrived at the King Power Stadium.

Rodgers arrived at the end of February but lost his first game in charge against Watford on March 3.

However, the Foxes responded with a 3-1 success over Fulham last week and Leicester are now are eyeing a top-10 finish.

Rodgers’ side travel to Burnley on Saturday and back-to-back wins could see them climb above West Ham United in the table.

Maddison grabbed an assist against Fulham and the former Norwich man admits the squad is full of confidence at present.

“We want the next game to come as quickly as possible, especially after a good performance,” he told LCFC TV. “We’ll recover, we’ll rest-up and we’ll get back to training again.

“The more we work with the gaffer on the pitch, the more we’re going to see his style and his philosophy come into action on the field.

We look forward to that and there’s a real good feel good factor around the Club at the minute, so hopefully this is a sign of things to come.”

Maddison, during his debut season in the Premier League, has now played a role in 11 goals for the Foxes, scoring five times and assisting a further six.

He will be hoping to play his part in Saturday’s game, where Leicester are 2.40 favourites. Burnley are 3.10 to win the game, while the draw is 3.25.