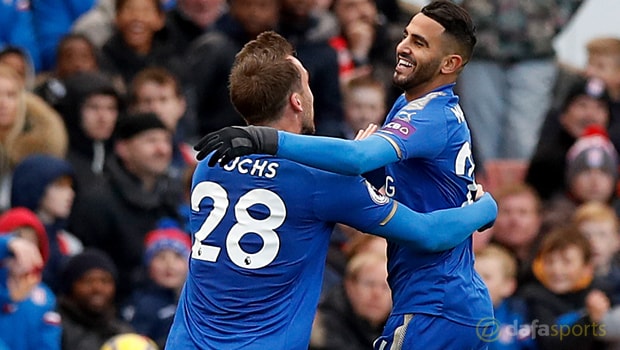 Former striker Emile Heskey has told Leicester City winger Riyad Mahrez he needs to start producing the goods if he is going to earn a move away from the King Power Stadium.

Mahrez joined the English outfit in 2014 from Le Havre and he played a huge role in helping Leicester sensationally win the Premier League title in the 2015/16 season.

The Algeria international scored 17 goals from 37 league appearances in that title-winning campaign and that led to huge interest from a number of top European teams.

However, the 26-year-old decided to stay for the following season but, after the Foxes struggled domestically, he thought the time was right to move on.

The 26-year-old handed in a transfer request in the summer transfer window but not a single club matched Leicester’s valuation and he remained at the King Power.

Mahrez has only scored two league goals this term, leading to slight criticisms of his performances, and former City and England striker Heskey believes the winger needs to put up or shut up.

Speaking exclusively to 888Sport, he said: “It’s time he got the best out of himself, because at the end of the day it’s about him, isn’t it? “Whether he wants a move or not, he’s still got to produce and go out there and perform.

“He’s done that reasonably well, but there’s a lot of onus put on his shoulders because of the performances he has produced in previous years.”

Leicester return to action on Saturday with a tricky home clash against unbeaten Premier League leaders Manchester City and the hosts are 8.50 outsiders to win, a draw is priced at 5.50 whilst the Citizens are 1.33 favourites.