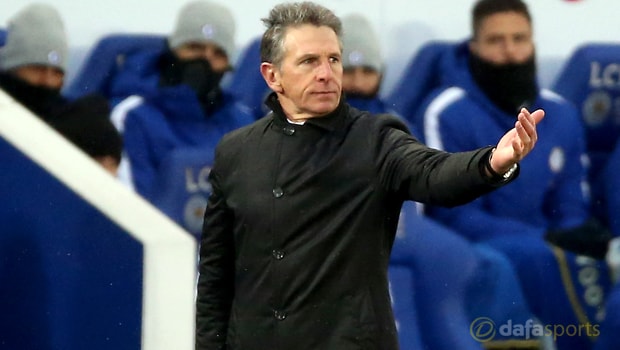 Leicester City boss Claude Puel feels England could do worse than playing Jamie Vardy and Harry Kane together at this summer’s World Cup in Russia.

Kane is likely to lead the Three Lions attack but Foxes frontman Vardy showed his capabilities with a fine strike in the midweek draw with Italy at Wembley.

The Spurs forward is nursing an injury currently and Vardy will have been pleased to show Gareth Southgate that he is the logical alternative. Puel however has raised the possibility of the pair being played as a partnership.

“I think they can have a good balance because it is two players with different attributes. It is a good option for the manager,” he said. “It is a good choice.

It is important for the national team to have different players with different attributes and I think Jamie can take the space and give good moves; a good opportunity.”

Kane has racked up 12 goals for England since making his senior debut in 2015.

The Spurs frontman has contributed to Vardy seeing less game time in an England shirt, but Vardy boasts a decent strike rate of seven in 21 for his country.

Puel felt Vardy showed his worth to England when he replaced Marcus Rashford in the 1-0 win over the Netherlands in Amsterdam, with his work off the ball coming to the fore.

“Like in his first game, I said I know he cannot touch the ball for example, but it was important for the team because he gave good options, good moves and good rhythm for his teammates,” added the Leicester boss.

“It is always important for a player to be giving good moves behind the defenders, it is always difficult to make a marker on him.”

Leicester are 2.63 to win at Brighton on Saturday, while Vardy can be backed at 6.00 to net the opening goal.