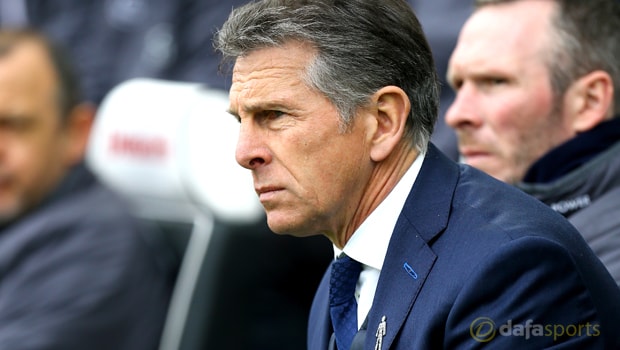 Manager Claude Puel has revealed he could be without goalkeeper Kasper Schmeichel and forward Shinji Okazaki for Thursday’s Premier League clash against Southampton at the King Power Stadium.

Denmark international Schmeichel picked up an ankle injury in the 2-1 defeat to Burnley last time out while Japanese Okazaki also sustained a similar problem against the Clarets.

The 31-year-old goalkeeper has been unable to train ahead of Thursday and is the biggest doubt out of the two players.

“It was a fall and a knock (for Schmeichel),” Puel said. “The problem is in his ankle and we will see if he can play in this game. Okazaki, also, we will see if can come back with his ankle too.

“For the moment, (Schmeichel) cannot train with us. We need to adapt to the situation, of course, like we have done already.”

Schmeichel’s absence would offer an opportunity to back-up Ben Hamer, who came on with a few minutes remaining in that loss to Burnley, whilst Kelechi Iheanacho is in line to replace Okazaki.

The Foxes head into the game following successive 2-1 defeats and are winless in their last four matches at the King Power Stadium in all competitions.

Puel’s men are still the narrow 2.38 favourites to pick up all three points, a draw is priced at 3.40 while the Saints, who desperately need a win to stand any chance of avoiding the drop this season, are a 3.00 chance.

Leicester won the reverse fixture earlier in the campaign 4-1, with Riyad Mahrez, Andy King and Okazaki (2) all getting on the scoresheet at St Mary’s.