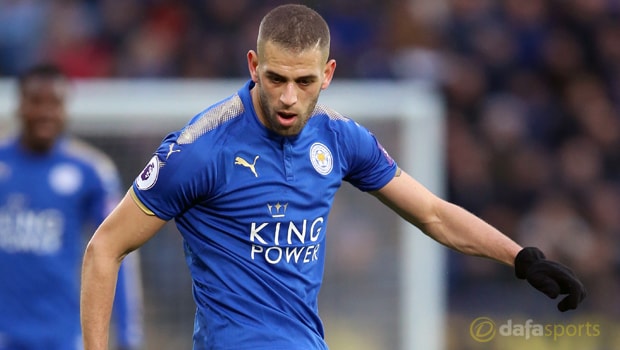 The Algeria international has failed to live up to his reputation since joining the club in the summer of 2016 for €30million from Sporting Lisbon.

He scored 31 goals for the Portuguese side before moving to the King Power Stadium but the form of Jamie Vardy has kept him out of the first team.

Former managers Claudio Ranieri and Craig Shakespeare both used Slimani off the bench and his current situation has alerted the likes of Watford, Newcastle United and Besiktas.

The 29-year-old has scored five goals in 16 appearances this season, with Vardy and Shinji Okazaki ahead of him in the pecking order.

Slimani showed glimpses of his potential in the FA Cup third round draw with Fleetwood on Saturday and Puel is determined to keep the powerful frontman at the Foxes.

He told the Leicester Mercury: “This period is always difficult with speculation about different players.

“I am happy with Slim. He played well in the second half against Huddersfield and he needed to build on this with another opportunity (at Fleetwood).

“I think in this transfer window we need to have a look at the balance of the squad.

For example, we have a lot of strikers and offensive players. We need to have better balance to give them more game time.”

Slimani will be doing all he can in training to try and start the game against Chelsea on Saturday.