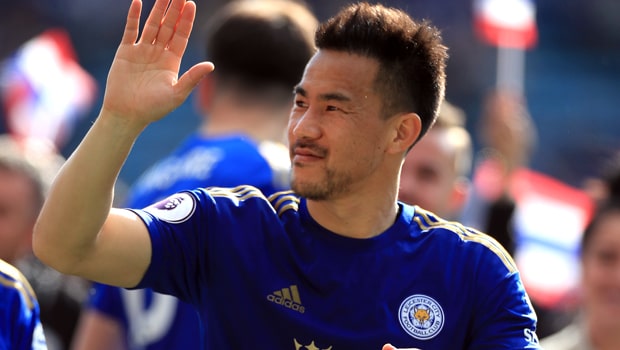 Christian Fuchs feels Leicester City will miss the presence of striker Shinji Okazaki around the club next season.

The Foxes forward played his final game for them against Chelsea on Sunday, having confirmed his desire to move on this summer after finding his first-team opportunities limited.

Both Fuchs and Okazaki have played their part in the most successful era in the Foxes history after arriving together in the summer of 2015 from the Bundesliga.

The pair became close friends while they were teammates and Fuchs has paid tribute to the departing 33-year-old. “I watched his highlight reel on the Leicester City Twitter feed,” said Fuchs.

“He has been a great addition and [he’s] a big character – even though he’s only smiling and not talking too much, but he’s a fun dude!”

Okazaki was a £7m signing from Mainz and he would go on to score 19 goals in Leicester colours in his 136 appearances.

He played his part in the historic Premier League title win in 2015/16 and was a Champions League goalscorer the following season as Leicester marched on in Europe. Fuchs says his departing teammate is the sort of player that can be underestimated.

“I knew him from my time back then in Germany when we faced each other several times, he was never easy to play against this small dude with the big thighs. It’s tough to play against players like that.

“He will be a loss, but I understand that he wants to move on and explore other opportunities for his career, and I wish him all the best.”