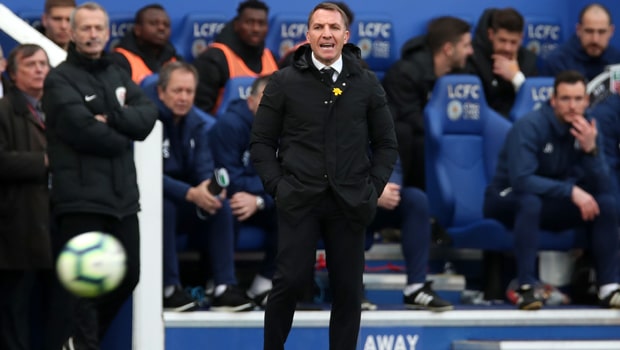 Leicester manager Brendan Rodgers has stressed the importance of having experienced heads in his squad as he looks to ensure his youngsters have some good mentors.

Rodgers secured a return to the Premier League after agreeing to replace Claude Puel at Leicester in February.

The Northern Irishman has overseen an improvement in performances as he looks to gauge where the squad is at ahead of a potentially busy summer.

He is expected to put his stamp on the Foxes when the transfer window opens after admitting he wants to take the club back into Europe.

Leicester have some promising youngsters on their books in the shape of James Maddison, Ben Chilwell, Demarai Gray, Harvey Barnes and Hamza Choudhury. The former Swansea and Liverpool boss insists he is exciting to aid their development but admits he will need some older heads to help out.

Wes Morgan, Jonny Evans and Jamie Vardy all fall into that category and Rodgers feels he won’t need to add experience to his ranks during the off-season.

“It is important, you definitely need it,” Rodgers said. “We have great experience within the squad. Look at the top end of the field in Jamie Vardy and you look at Wes Morgan behind the scenes, who doesn’t play so much maybe but he has that good experience.

“We have good experience. With Jonny, if he stays injury free he is an outstanding player. They have experience there. They need help of course but it is just about getting good players.”

Leicester return to action on March 30 and are priced at 1.83 to take all three points against Bournemouth, who can be backed at 4.33, while the draw is available at 3.75.