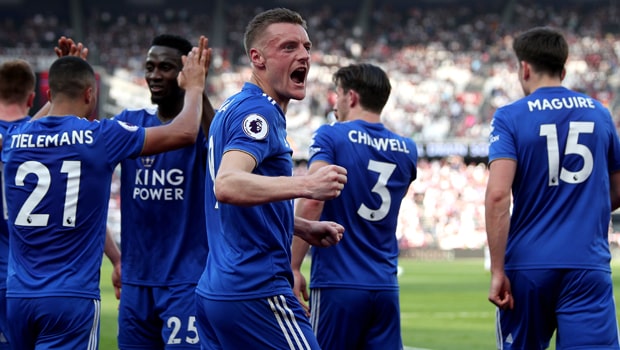 The former England international scored his 16th goal of the season on Saturday as he helped his team secure a point in a 2-2 draw against West Ham United.

That strike was his seventh in as many matches since Rodgers took the job at the King Power Stadium.

Vardy’s goals have helped Leicester challenge for a top-seven spot in the Premier League but Rodgers has been quick to praise his work off the ball too.

He told the club’s official website: “It’s very interesting when you’ve watched him from the outside.

When you watch him as a spectator, you see his goals, but you can’t do what he does in the game without being really intelligent in football.

“His intelligence of the game is so high. That’s why he’s so alert and he always gets chances. He never switches his engine off. He’s always there, ready to press and ready to work.

“I’ve always had a central striker in my teams that is quick, dynamic and gets goals. It’s not just one player, but the collective will help him and that’s how it’s worked out.

“He’s got many more goals in him and how we want to play will definitely suit him. I see it in training – not only does he have physical speed, but he also has a speed of thought.

The speed is in his brain, he gets into good areas and that football intelligence is really high.”

Leicester are next in action on Sunday when they welcome Arsenal to the King Power Stadium. They are 2.80 to win, while the draw is 3.60 and Arsenal are 2.40 favourites.