Ronald Koeman: Toffees need to gel as a team 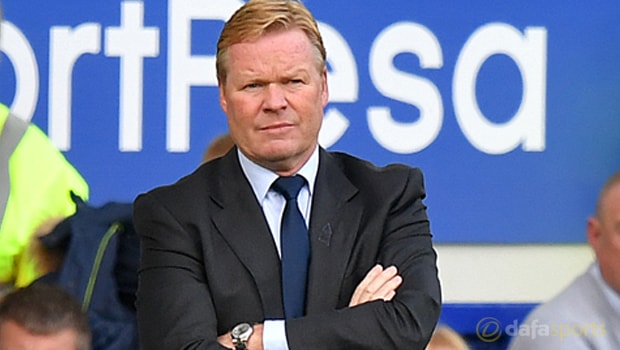 Ronald Koeman says Everton are performing like a collection of individuals rather than as a team after their latest setback.

The Toffees went down 3-0 to Atalanta in their Europa League opener in Italy on Thursday, following hot on the heels of a 3-0 Premier League loss to Tottenham at Goodison Park last weekend.

Respite is not an option for Koeman and his team, as they go to Old Trafford to face Manchester United on Sunday.

Koeman apologised to the Everton fans for their listless display again Atalanta, opponents from whom he believes his players must learn.

“I’m really sorry for the fans,” said the Dutchman.

“It’s a big lesson. I thought it was happening after the third goal against Tottenham, but okay – I need to ask myself the question, what I did wrong.

“Because what I saw on the pitch was a big difference between Atalanta and Everton in belief and confidence, and also in aggression and passion.”

A dire Everton side were well and truly punished by Atalanta, who scored three first-half goals to end the game as a contest.

Koeman had called for a reaction in Italy following the Spurs loss and he says both he and his players have got questions to answer now.

“They showed to us really the passion you need to have and show when you play football,” he added. “So that’s a question to myself, what I did wrong.

“It’s easy to criticise the players, the team, and individual mistakes, but finally, the team was not prepared judging by what I saw in the first half.