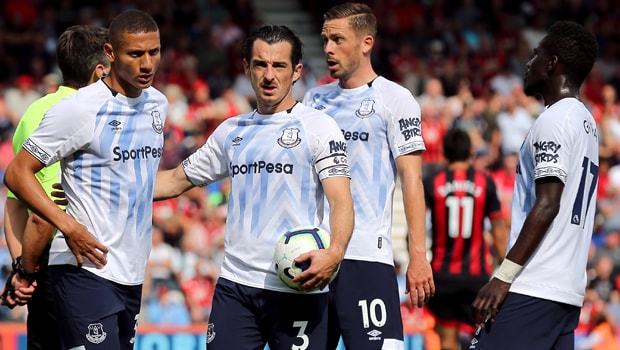 Marco Silva has warned Richarlison to learn fast from his “naive” sending-off against Bournemouth on Saturday.

The Everton playmaker had made a flying start to the season but he was dismissed four minutes before half-time during his side’s 2-2 draw at the Vitality Stadium.

Everton would go on to lead the game 2-0, it was scoreless when Richarlison was sent off, but they were pegged back by the Cherries, who were also reduced to ten men in the second half.

The Brazilian joined Everton for a club-record £40m earlier this summer and Richarlison has been told by his manager he must learn very quickly from his mistake.

“It is naive, it is something Richarlison can’t do,” Silva said after the game.

“Both players to put their heads against one another and with minimum contact or movement as well. But it is something he cannot do.”

Michael Keane scored Everton’s second goal in the second half before leaving the field on a stretcher and heading for hospital following a clash of heads. Despite letting their advantage slide, Silva was happy with Everton’s performance.

“I asked them to keep our shape, good organisation again, but never give up and always believe we can score,” he added.

“And until 70-75 minutes it looks like the game is in our hands, but in football at this level, you have to keep your balance every time and you cannot give chances to our opponent when playing away and winning 2-0 to put counterattacks against us.”

Everton are 1.60 to defeat Huddersfield next Saturday at Goodison Park. The Terriers are 6.00 while the draw is 4.00.