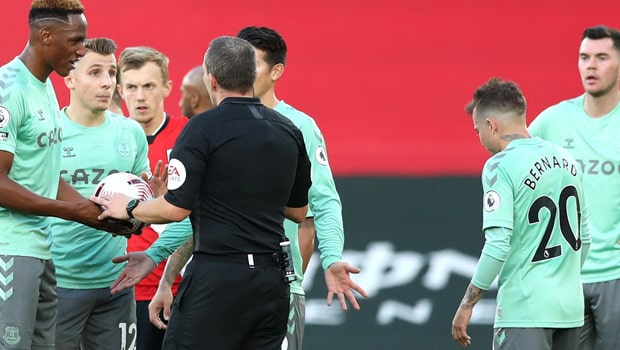 Everton’s defender Lucas Digne has now seen his three-match suspension reduced to one match on Tuesday.

Digne was red-carded in the game against Southampton on Sunday in the English Premier League as the Toffees’ unbeaten start to the season went down the drain with a 2-0 defeat.

Digne was sent off for treading on Walker-Peters as Carlo Ancelotti’s side got its second red card in the second consecutive game after Richarlison got red-carded in the Merseyside Derby last season.

Immediately after the game, Everton manager Carlo Ancelotti revealed that the team would appeal the decision, which he described as “a joke.”

“The red card was a joke. Maybe the fact that there was a lot of talks all week about Pickford and Richarlison against Liverpool affected the decision. We will appeal; to lose a player like Digne for three games like this is not fair.” Ancelotti told pressmen.

While the red card hasn’t been canceled, an independent commission reduced the suspension to one game as the 27-year-old will now miss Sunday’s tie against Newcastle.

His next game for the Toffees is against Manchester United on 7 November. Everton will hope to keep their season-opening momentum, which has seen them top the log after six games with 13 points.

Meanwhile, on Monday, Brighton drew 1-1 against West Brom while Tottenham beat Burnley at the Turf Moor 1-0.

Everton is trailed by Merseyside rivals Liverpool only on goals difference. Aston Villa and Leicester City are third and fourth consecutively on the log in the early days of the 2020-2021 English Premier League season.

Meanwhile, as Manchester United prepares to face RB Leipzig in UEFA Champions League on Wednesday, they will have Strikers Edinson Cavani, Marcus Rashford, and midfielder Bruno Fernandes is available for the game.

The Red Devils drew Chelsea 0-0 in the Premier League over the weekend.