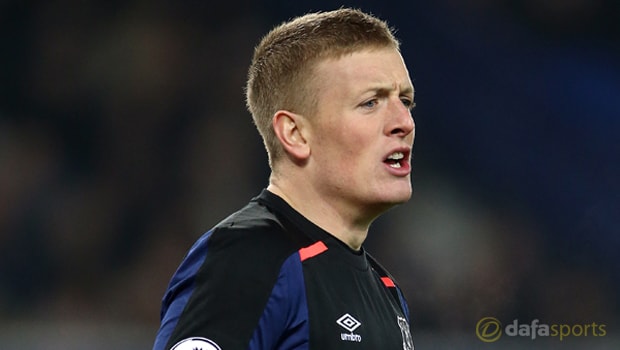 Goalkeeper Jordan Pickford says he is focused on performing consistently for Everton as he looks to secure a spot with England at the 2018 World Cup.

The 23-year-old put in a man of the match performance on Saturday as Everton held defending Premier champions Chelsea to a goalless draw at Goodison Park.

Pickford has been a consistent performer for the Toffees since joining from Sunderland over the summer in a deal worth in the region of £25million.

The stopper is expected to win a place with England at the 2018 World cup in Russia, however, he still faces a fight to tie down the number one jersey.

Regular number one Joe Hart’s position in the starting XI looks uncertain after losing his starting role with West Ham, while Stoke’s Jack Butland has struggled with injuries over the last 18 months.

Pickford says he is just focusing on performing domestically for the Toffees and hopes that Three Lions boss Gareth Southgate recognises his efforts.

“It is still a long way to go. I have to keep putting performances in for Everton. I cannot control anything else,” Pickford said.

“The main thing is making sure I am on the plane because that will be a great experience for myself.

“There is loads of competition, that is why you cannot think about that too much.

“You can do all the stuff on and off the pitch to get there, but the main thing is performing on a Saturday and getting clean sheets is only going to help.

“But I still feel it is a long way away and I just need to focus on grafting away and becoming better and more mature as a goalkeeper.”

Everton are next in action on Boxing Day and can be backed at 3.25 to pick up three points when they travel to West Brom, who are priced at 2.40 to come out on top, while the draw is available at 3.10.