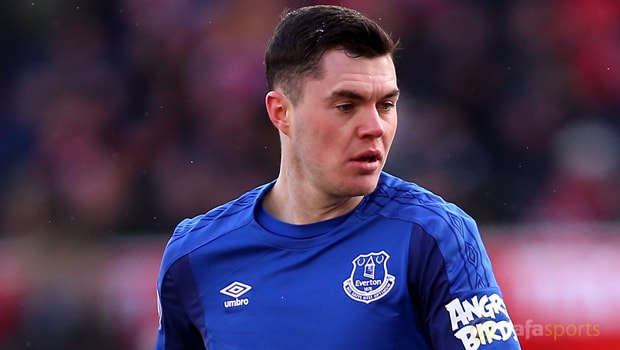 Everton defender Michael Keane believes he can still secure a spot with England at the World Cup but admits he must end the season on a high.

The central defender joined Everton from Burnley over the summer in a deal that could potentially rise to £30million.

Keane has struggled to show the form that won him the move from the Clarets and admits it has been a steep learning curve at Goodison Park.

He has been a regular for the Toffees and the 25-year-old feels he can use the experience from his debut season to become a better player in the future.

Keane told the club’s official website: “It has been a tough season but a massive learning curve. In the future it can only make me a better player.

“I think I have improved in the past few months and my performances have been getting better,” added Keane.

“I need to continue that until the end of the season. “I know there is a lot more to come from me. Hopefully I can show that, if not this season then definitely in 2018/19.”

Keane’s lack of form saw him left out of Gareth Southgate’s most recent England squad but he is refusing to give up hope on securing a place in the final World Cup squad, which will be announced at the end of the domestic season.

He added: “I’ve not spoken to Gareth but I still believe I have a chance of going to the World Cup.

“All I can do is focus on my own performances. I know I must play well in these last four games and show what I can do. Hopefully that gives him something to think about.”

Everton can be backed at 2.30 to win their next outing on Monday when they host Newcastle, who are priced at 3.30 to come out on top, while the draw is available at 3.30.