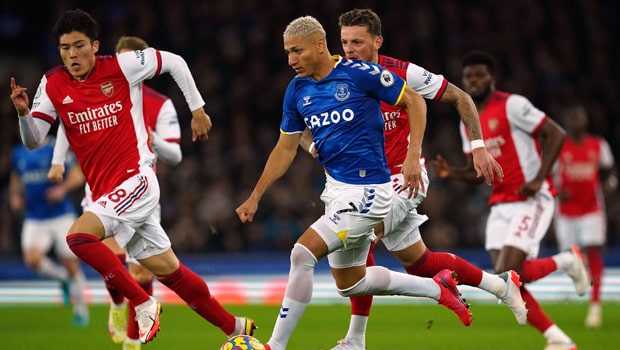 On Monday evening, Everton displayed a formidable performance against Arsenal as they recorded their first win in eight matches.

The game started slowly, but Richarlison thought he had put Everton in front when he headed in a free kick in the 44th minute, but the VAR ruled it out for offside.

Arsenal then scored immediately through Martin Odeegard when he slammed home a Kieran Tierney’s cross just before half-time.

Richarlison then scored what would have been his second goal of the game, but another VAR check ruled his goal out for another marginal offside.

The Brazilian striker finally got his goal when he headed in the ball from a strike that hit the crossbar with less than 15 minutes to play.

However, there was time for English forward Demarai Gray to score a spectacular strike to hand Everton their first win in eight games in the Premier League.

Meanwhile, Arsenal will face Nottingham Forest in the third round of the FA after the draws were made on Monday evening before the start of Arsenal’s game.

The last time both teams met, the lower League side knocked out the Gunners from the FA Cup.

There is an all Premier League tie involving West Ham United and Leeds United while Manchester United will face Aston Villa.