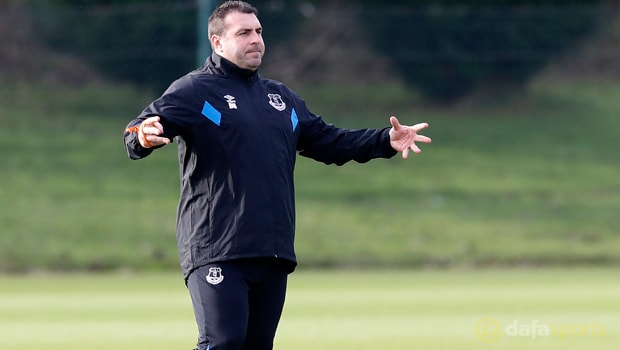 Everton interim boss David Unsworth has questioned his side’s mentality following their Europa League elimination at the hands of Lyon on Thursday.

The Toffees were humbled 3-0 at Parc Olympique Lyonnais and the result means they can no longer reach the knockout stages even though there are still two rounds of fixtures to play.

Things had been going to plan for Everton during the first-half, as it was 0-0 at the break, but Lyon struck through Bertrand Traore, Houssem Aouar and Memphis Depay after the interval to seal the English side’s fate.

Unsworth, who has now lost all three of his matches since taking over the Everton reins on a temporary basis following the sacking of Ronald Koeman, admits his side need to be stronger mentally, particularly when they fall behind in matches.

“It’s not about me,” he told reporters. “It’s about the football club. It’s about getting over this disappointing result.

We can’t cave in the way we do when we concede a goal. We need to rectify that very, very quickly.

“When you’re not winning games you do concede sloppy goals. The mentality must be stronger and we must have courage if we go a goal behind.”

Everton are currently in the Premier League relegation zone and they face a crucial clash with Watford at Goodison Park on Sunday, a match that Unsworth is placing great importance on.

“We have got to pick ourselves up really, really quickly,” he added.

The Toffees are priced at 2.15 to record a much needed victory against Watford, who are available at 3.50, while the draw is on offer at 3.40.