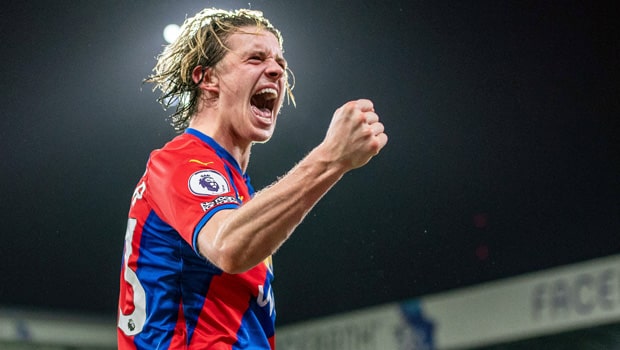 Conor Gallagher scored his fifth and sixth Premier League goals since joining from Chelsea on loan at the start of the season when he helped Crystal Palace to a 3-1 win over Everton.

The Toffees had a return to their shambolic form that has characterised their season so far with their performance at the Selhurst Park on Sunday evening.

Demarai Gray was at fault for the hosts’ first goal of the game when his misplaced pass allowed Jordan Ayew to set up Gallagher.

Then manager Rafael Benitez decided to substitute midweek hero in the 2-1 win against Arsenal, Richarlison to the dissatisfaction of the club’s travelling fan.

Although Rondon gave Everton hope of getting something from the game like in their previous 2-1 win over Arsenal, Gallagher dropped all hopes of such dead in a spectacular manner to secure a 3-1 victory for the Eagles.

Youri Tielemans scored twice on his 100th Premier League appearance as Leicester City beat Newcastle 4-0 as the bounced back from their UEFA Europa League exit during the week.

James Maddison and Zambian forward Patson Daka were also on target in the game.

Burnley and West Ham United played out a 0-0 draw on Sunday afternoon as well while on Saturday. Arsenal scored three against Southampton while Rinaldo’s penalty gave Manchester United a 1-0 win over Norwich as Chelsea beat Leeds United 3-2 with a stoppage-time penalty from Jorghino.

Manchester City had Raheem Sterling to thank after his goal ensured a 1-0 win over Wolves on Saturday. Liverpool beat Aston Villa with a 1-0 scoreline on Steven Gerrard’s return to Anfield.