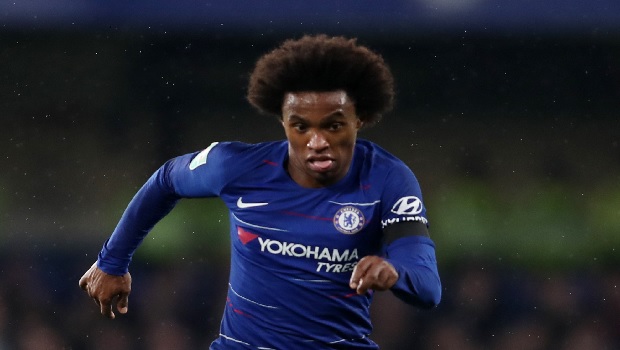 Chelsea forward Willian has heaped the praise on manager Maurizio Sarri, who replaced Antonio Conte over the summer.

The Brazil international occasionally found himself out of favour under Conte but has been a regular fixture for Sarri.

Willian was heavily linked with Barcelona in the last transfer window but a move failed to materialise and he has made a strong start to the campaign at Stamford Bridge, registering two Premier League goals and three assists so far.

The 30-year-old says Sarri has been behind his fine start to the season for the title challengers. He told ESPN Brazil:

“He’s funny, sometimes he says something funny and everyone starts laughing. So that gives a relaxed atmosphere too, doesn’t it? And we players, everyone here likes his philosophy, the way he is, everyone is enjoying it.

“He talks to all the players in the same way, makes jokes as well and works very seriously, that’s the most important thing about him.

Chelsea are third in the Premier League table, two points behind Manchester City and Liverpool, and are 11.00 to win the league outright. City are 1.40 to take the title and Liverpool can be backed at 3.75.