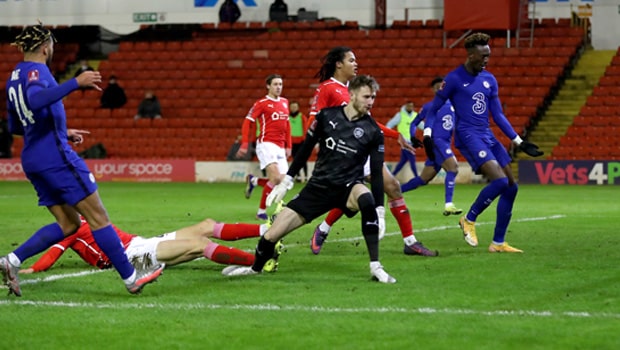 Tammy Abraham’s second-half goal was all Chelsea needed to continue their winning run under manager Thomas Tuchel in their 1-0 victory over Barnsley in the FA Cup.

After a goalless first half, Tammy Abraham swept home a Reece James pass in the 64th minute of the game.

The goal was enough for the Blues to go past the stubborn Barnsley side that hasn’t lost in their last three games before the FA Cup encounter on Thursday evening.

Chelsea also has been in good form since the appointment of Thomas Tuchel winning three after the manager’s first game ended in a goalless draw against Wolves in the Premier League.

It is the 15th time that the Blues will reach the Quarter-finals of the FA Cup since the year 2000, the most by any team in the competition.

Chelsea will host Newcastle United in the Premier League on Monday.

Meanwhile, Wolves lost their FA Cup tie against Southampton 2-0 at the Molineux Stadium on Thursday.

The win also is the Saints’ first win in five games in all competitions. The saints have reached the FA Cup quarter-final in two of the last four seasons, including a semi-final finish in the 2017-18 season.

Southampton will now face Championship side Bournemouth in the quarterfinals while Everton’s reward for their 5-4 extra-time win against Tottenham is a tie with Manchester City.