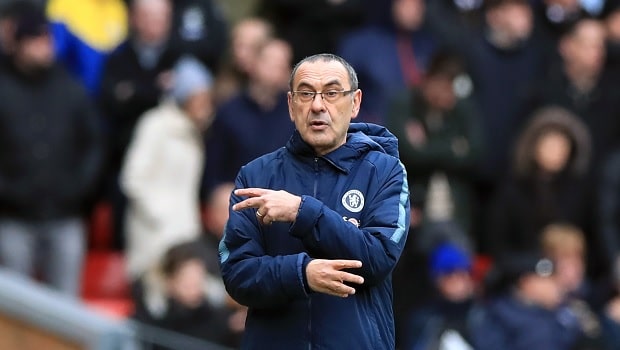 Chelsea boss Maurizio Sarri has claimed he wants to stay at the club, and he believes he can turn them into title contenders in the next two years.

The Blues can still win a trophy this season after reaching the semi-finals of the Europa League, but their domestic plans have fallen short so far.

Sarri’s men can still clinch a place in the top four and overcoming Manchester United this weekend will certainly boost their chances. A defeat to the Red Devils will allow United back into the race, while Arsenal, who travel to Leicester City on Sunday, are also competing for a spot in Europe.

Sarri’s future continues to dominate the headlines but the Italian has claimed he wants to remain at Stamford Bridge and improve the club’s fortunes before winning his first title as a manager.

“But I am not sure that, in two seasons, we will be able to be better than them. When I arrived in Naples, Napoli were, in the table the season before, 24 points from Juventus. “In the first season we arrived to nine points from Juventus, second season to six points, third season to four points. For us it was impossible to cover completely the gap, but at the end of the third season, we were very close to doing it.”

Despite their recent poor form – losing seven of their last nine games- Man United remain 2.63 favourites to win this weekend, while the draw is 3.30 and Chelsea are priced at 2.75.