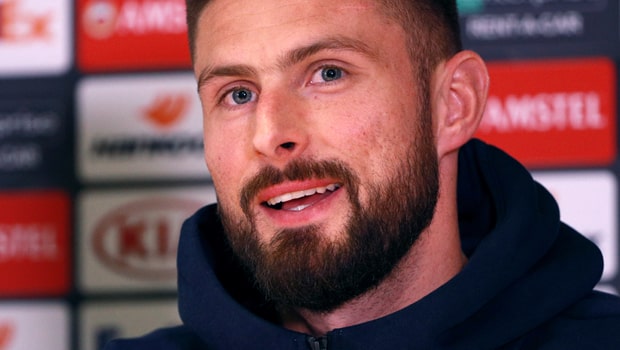 Nice technical director Gilles Grimandi has revealed he has spoken to manager Patrick Vieira about the possibility of signing Chelsea striker Olivier Giroud in the summer.

Vieira is looking to strengthen his attacking options in the upcoming transfer window and reports are claiming France international Giroud is a serious target for the Ligue 1 outfit.

The forward joined Chelsea from Arsenal on an 18-month contract in January 2018 but he has found first-team opportunities limited during his time at Stamford Bridge, having started just 13 Premier League matches.

Giroud has primarily been used in the cup competitions and has proven his worth in the Europa League this term, having helped the Blues reach the final after scoring a tournament-high 10 goals.

The 32-year-old’s contract expires this summer although Chelsea do have the option to extend that by another 12 months, and it is expected they will do this after they were handed a transfer ban for the next two windows.

However, speaking during an interview with Canal Football Club, Grimandi revealed the club are deliberating whether to make an offer for Giroud during the summer window.

“If Olivier Giroud decides to come that is because he likes the project at OGC Nice,” he said. “If Olivier is not happy at Chelsea, if he wants to play, we will take all the elements into account.

I have spoken with Patrick [Vieira] about Olivier Giroud, but we have not spoken with Olivier Giroud.” Giroud is expected to get the nod up front when Chelsea take on Arsenal in the Europa League final in Baku on May 29.

The Blues are 2.25 favourites to win the match in 90 minutes, while the draw and an Arsenal win are both priced at 3.25.