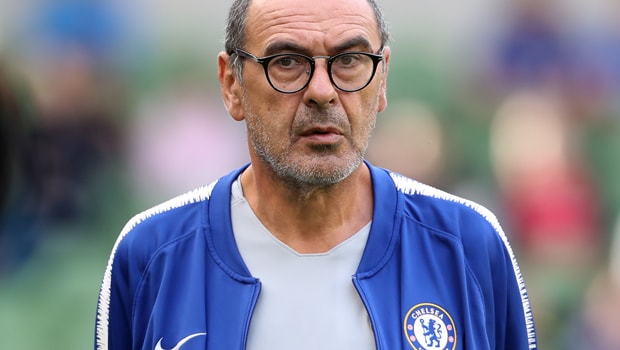 Chelsea boss Maurizio Sarri wants to keep hold of his “top players” although he may face an anxious wait before the close of the transfer window.

Sarri took over as manager at Stamford Bridge earlier this month and has had to contend with constant speculation surrounding the futures of Willian, Eden Hazard and Thibaut Courtois since his arrival.

Chelsea have reportedly rejected several bids from Barcelona for Brazil international Willian, while Real Madrid have been heavily linked with moves for Belgium duo Hazard and Courtois.

The trio are yet to return to Chelsea training following their exploits at the World Cup and Sarri acknowledges he will know more about their futures once they are back in west London.

“In this moment [I can’t comment on transfer speculation]. I will see them on Saturday for the first time so I don’t know the situation in this moment,” Sarri said.

“We are talking about top players and I think every club wants to keep top players.”

One player that looks set to play a prominent role under Sarri this season is youngster Callum Hudson-Odoi, who impressed during Chelsea’s International Champions Cup defeat to Arsenal on Wednesday.

“He’s a young player,” Sarri added. “We have to wait. But in the future he will be a very, very strong player. Will he be in the first-team squad? I think so. He will be staying with us for all the season.”

Chelsea kick-off their domestic campaign when they take on Manchester City in the Community Shield on Sunday and they are priced at 3.50 to win that match, while the reigning Premier League champions are available at 2.10, with the draw on offer at 3.50.