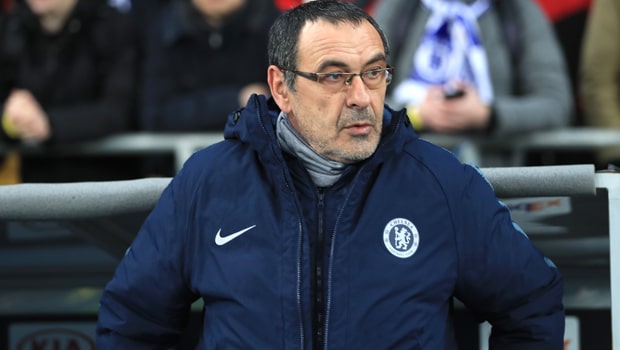 Chelsea manager Maurizio Sarri says he wants to avoid old club Napoli in the quarter-finals of the Europa League as he wants to meet them in the final.

The Blues cruised into the last eight of the competition with a 5-0 victory away at Dynamo Kiev, securing an 8-0 aggregate win, Olivier Giroud scoring a hat-trick in the Ukranian capital.

Others through to the last eight include Arsenal and Napoli, the latter coming through 4-3 on aggregate against RB Salzburg.

It increases the possibility of Sarri facing his old club at some stage in the competition but the Italian hopes any reunion is put on hold until the final.

“You know very well my relationship with the city, with the people. So, for me, it will be very difficult to play against them in Naples.”

Chelsea are 3.75 to win the Europa League with Napoli 3.40 and Arsenal 4.50. Chelsea will discover their opponents in the last eight and potentially the semi-finals in Friday’s draw.

Sarri was delighted overall with the performance of his team, winning the first-leg 3-0 and scoring early in the return game to make sure of progression.

“We started very well. We wanted to start in this way,” he added. “We scored after five minutes which was a very difficult situation for the opponents. We played a wonderful first half and managed the game in the second half.”

Sarri is yet to win silverware during his managerial career but victory in the Europa League would not only see him break his trophy duck but also secure qualification for next season’s Champions League, no matter where the Londoners end up in the final Premier League standings.

They are currently sixth in the table, three points behind Arsenal in fourth and will hope to close that gap Sunday when they play away at Everton. They are 1.95 for the win with Everton 4.00 and the draw 3.50.