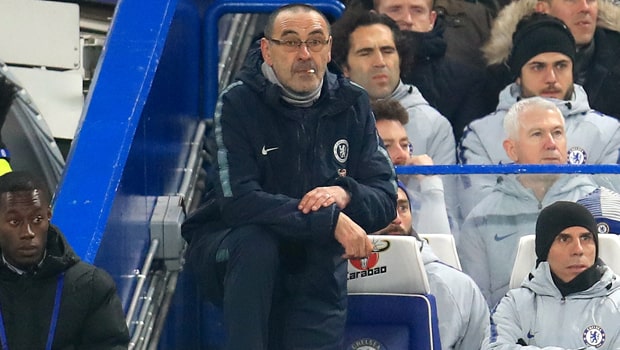 Maurizio Sarri was delighted with the response of his Chelsea players as they booked their place in the Carabao Cup final with a penalty-shootout success over Tottenham on Thursday.

The Italian had heavily criticised his players following last weekend’s Premier League defeat to Arsenal, but he got the desired response at Stamford Bridge, as the Blues quickly wiped out Spurs’ 1-0 lead from the first leg, with goals from N’Golo Kante and Eden Hazard putting them in the ascendancy.

Fernando Llorente was able to draw Spurs level in the tie with a second-half header and that was enough to force a penalty shootout, but misses from Eric Dier and Lucas Moura meant it was Chelsea that progressed through to next month’s final where they will take on Manchester City.

After the match Sarri revealed his delight at the way his side responded to his recent criticism, although he was also keen to emphasise that he did not go overboard with what he said.

“I think that they reacted really very well, but I didn’t attack my players,” Sarri told reporters.

“I only said that we had a problem. The reaction was really very good, but I think we need to have motivation with continuity now.”

Sarri knows Chelsea will be up against it when they take on City in the final, but he is hopeful they can secure the first piece of major silverware of the season.

He added: “I was really very happy with the performance before the penalties. Of course, now, it’s better because we are able to play in a final, a very difficult final but we will go to play.”

Chelsea are priced at 2.63 to go on and win the Carabao Cup for the sixth time in their history, while City are available at 1.44 to defend the title they won 12 months ago.