Eden Hazard: We do not need a new forward 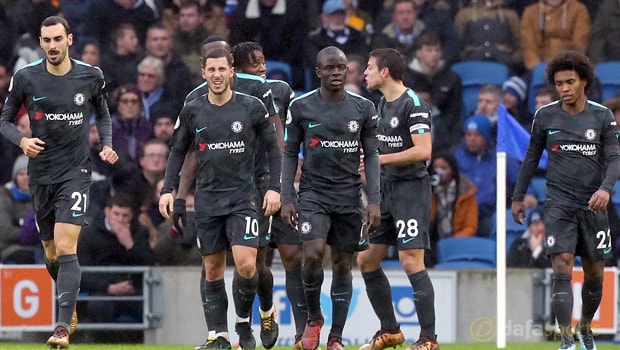 Chelsea star Eden Hazard is adamant the club do not need any new strikers despite speculation suggesting manager Antonio Conte is in the market for a January signing.

The Blues were linked with a number of strikers last week, with Conte reportedly unhappy with his options in attack.

Spaniard Alvaro Morata has scored 10 goals in 20 appearances for the Blues, but backup Michy Batshuayi has only netted on two occasions.

Morata was suspended for the 4-0 win over Brighton on Saturday, but Batshuayi did make an impact as the lone striker.

However, despite the speculation Hazard believes their current squad is good enough to compete this season.

“I think we’re happy with the team we have. It depends how you want to play,” Hazard told the Evening Standard.

“We have two very good strikers in Alvaro and Michy. If they are not ready to play I can play striker, so I don’t think we need [another one].

“Football is simple – keep the ball on the ground and try [to play] like we did [against Brighton].

“Because we are missing chances people are saying we need another striker, but if we are scoring goals, we are the best attack in the league and no-one can say we need a striker.”

Hazard will be expected to start Wednesday’s Carabao Cup semi-final against Arsenal, with the Blues 2.40 favourites to win. Arsenal are priced at 3.00, with the draw 3.40.