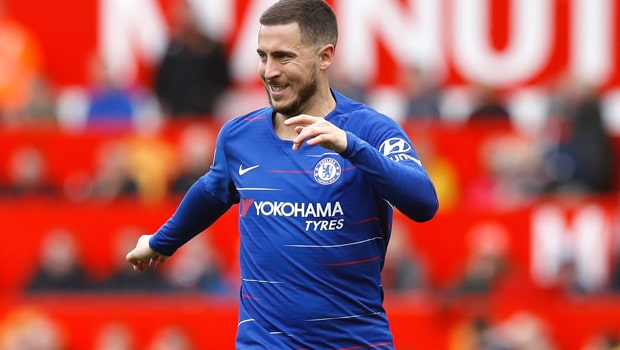 Chelsea forward Eden Hazard may not be at the club next season but has vowed to ensure they are involved in the Champions League.

The Belgian is widely expected to leave Stamford Bridge with Spanish giants Real Madrid understood to be preparing a bid for his services.

Since joining Chelsea (priced at 2.38 to win the Europa League) from Lille in the summer of 2012, Hazard has established himself as the star man in west London.

Hazard has played in the Champions League in five of his seven seasons at Chelsea but they aren’t guaranteed a place in the competition next term.

They currently sit fourth after Sunday’s 1-1 draw at Manchester United but the Red Devils, who are in sixth, are just three points adrift with two games left to play.

Despite all the speculation over Hazard’s future he insists he will give everything to ensure they finish in the top-four.

“Chelsea has to play in the Champions League every year,” Hazard said.

“It’s one of biggest clubs in the world, and for myself also I want to play in the Champions League – and we will.”

The 28-year-old will enter the final year of his contract at the end of this season and boss Maurizio Sarri admits Hazard’s future is out of his hands.

Sarri said: “I don’t know. “You have to ask the club and the problem is the new contract. But I want to respect his decision.

“He will go in the last season of the contract next season, so I don’t know at the moment.