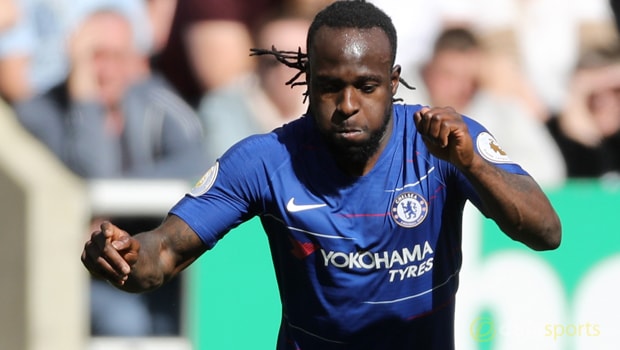 Chelsea wing-back Victor Moses is seeking redemption in Saturday’s FA Cup final against Manchester United after being sent off in the Wembley showpiece 12 months ago.

The Blues have made it through to a second successive FA Cup final but are hoping to avoid a repeat of last year, when they were denied the domestic double after losing 2-1 to Arsenal.

Nigeria international Moses, who was an instrumental figure in Chelsea’s Premier League title success last season, was sent off for two bookable offences during the final, the second of which came about after he was adjudged to have dived in the penalty area.

The 27-year-old admits the red card still “plays on his mind” but he is hoping to right the wrongs this weekend.

“It played on my mind a little bit but it’s happened. I can’t rewind it back now,” Moses said.

“It’s just something that happens in football, but you’ve got to move on.

“It’s definitely the worst feeling I’ve experienced in my career. I want to be on the pitch to help my team-mates and it’s not nice. But we’re back in another final and I’m looking forward to it.”

The FA Cup represents Chelsea’s only chance of silverware this season and Moses insists the entire squad are focused on the task at hand against Manchester United.

“It’s always a tough game whenever we play United. They’ve got quality players and so have we,” Moses added.

“The most important thing is to stay concentrated and make sure we win it.”

Chelsea are priced at 2.00 to claim FA Cup glory for the first time since 2012 on Saturday, with United available at 1.80.