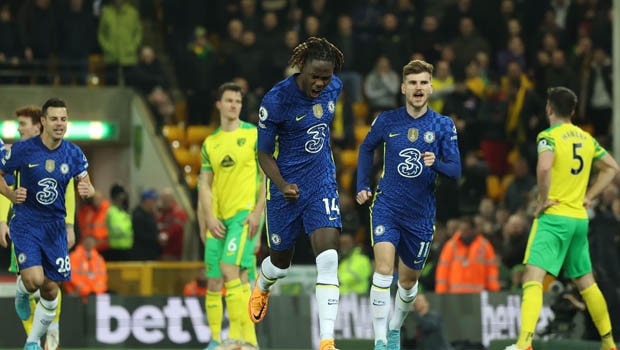 Problem-laden Chelsea defeated bottom club, Norwich City 3-1 on Thursday evening despite the sanctions placed on the Blues owner, Roman Abramovich, by the UK government, which will restrict the club from a couple of things.

With the sanctions, which are a result of the Russia-Ukraine crises, Chelsea won’t be able to sell match day tickets, replicas, sign new players or extend contracts of players until the sanctions are lifted.

Chelsea started strong with Trevoh Chalobah scoring after just three minutes of the game. The Blues doubled their advantage in the fourteenth minute through Mason Mount as they went into the break with a 2-0 lead at the Carrow road.

Finnish forward Teemu Pukki pulled one back from the penalty spot in the 69th minute of the game, but Kai Havertz sealed the game with a late goal as Chelsea continued to remain strong in the face of adversity.

Chelsea manager Thomas Tuchel stated that the win wasn’t easy as an away win and tagged it an excellent result. However, he stated that his team is still in the Premier League title race despite the awkward game date.

“It’s a bit awkward as we played weeks and weeks with no games in the Premier League. It’s necessary. We are in the race and want the best possible outcome. There is some noise around the club, so big credit to the guys for their character.” Tuchel said.

Chelsea remains in the third position with 58 points on table 13 and 7 points behind Manchester City and Liverpool respectively.