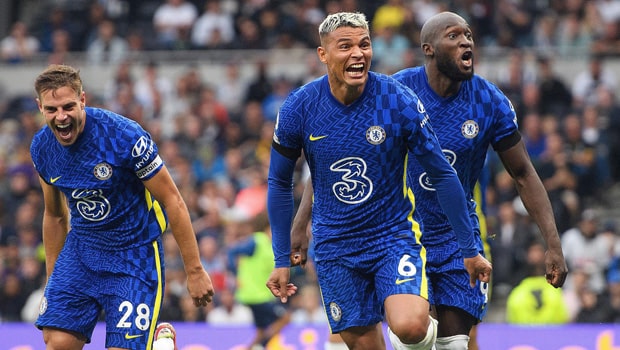 Chelsea continued their good record at the White Hart Lane stadium when they put three past Tottenham Hotspur on Sunday evening.

The Blues have won on their last three visits to their London rivals in the Premier League and Sunday’s visit was no different.

The first half ended goalless but the goals poured in the second half as Thiago Silva scored four minutes after the break.

Kante made it 2-0 in the 59th minute before Rudiger sealed the result in stoppage time as the Blues remain unbeaten this season in the League.

The Red Devils had gone behind at the London Stadium on the 30th minute when  Said Benrahma scored.

However, the lead lasted for just five minutes as Cristiano Ronaldo scored in his second Premier League game since his return and his fourth in three games.

Jesse Lingard who spent half of last season on loan at West Ham scored the winner with two minutes left on regular time.

There was drama at the end as West Ham lost a penalty and Manchester United goalkeeper De Gea described the moment as crazy.

“Everything was a bit crazy, I saw Declan Rice with the ball and then suddenly I saw Mark Noble with the ball. It was a bit strange. He’s the specialist of the team but I made the save and we got the three points.” De Gea said.

Wolves lost at home 2-0 to Brentford while Manchester City drew 0-0 with Southampton.