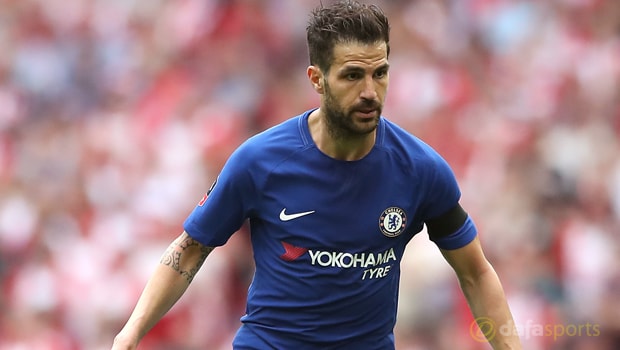 Cesc Fabregas has challenged his Chelsea team-mates to show they have the “fire” in them to win this weekend’s FA Cup Final against Manchester United.

The Blues have limped towards the showpiece Wembley clash, drawing at home to Huddersfield and then losing away at Newcastle in their final two Premier League games.

That was enough to ensure the outgoing Premier League champions forfeited any hopes of a top-four finish this season, missing out on the Champions League for next term in the process.

However, Fabregas has demanded Chelsea step up their performance for the big occasion against former boss Jose Mourinho and his Red Devils.

“You have to feel the fire inside of you, the hunger you want to show on the pitch and this is something neither me or the coach can bring to the players,” said Fabregas.

“The fire – you have it or you don’t have it and on Saturday we have to make sure everyone is on top of their game.”

Chelsea edged out Southampton in the last four and would be attempting to win the FA Cup for the first time since 2012.

They lost in the final to Arsenal a year ago. Fabregas says the players must raise themselves and give everything they’ve got in the one-off occasion.

“It’s a final, it’s a big game and I feel that normally in those games you shouldn’t have to motivate players to play football because we do what we love and we always have to do it 120 per-cent,” he added.

“It’s a final against United, on a big stage at Wembley, the last game of the season, you just have to go all for it.”